When I woke up early on the morning of Shae & Richie’s Queenstown Snowboard Wedding the rain was bucketing down!

But Shae & Richie’s wedding was on top of a mountain (Coronet Peak Ski Area) so I knew it was more likely to be snowing up there than raining if the weather stayed like this!

I waited until 9am and then did a weather check with Heli Tours, the heli company we had booked in to do a heli flight with before the ceremony.  Unfortunately, the forecast was for 120 km winds at 3000 – 4000 feet.  Which meant that the team at Heli Tours had to tell me that we wouldn’t be flying today.

At this point the weather seemed to lift a little and we even had some sunshine out where I live near Coronet Peak.  So, I fired up the Coronet Peak webcam to check the weather.  Sure enough, blue skies!! 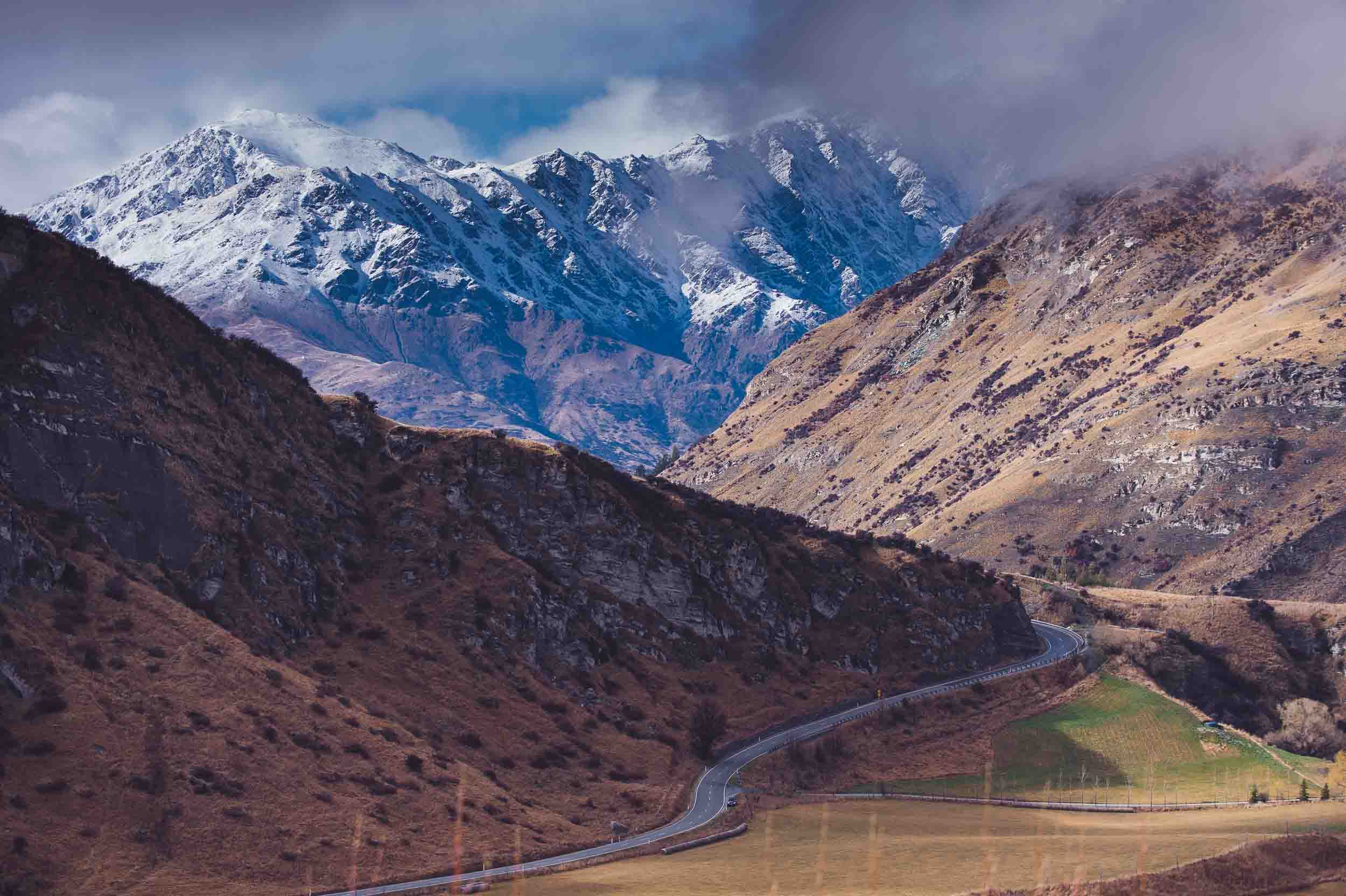 So my good mate and Wedding Filmer Josh Hutchinson of Choice As Media and I quickly gave Richie and Shae a bell.  We asked them to make their way to Coronet Peak as soon as they were dressed and ready to roll.  I explained that the heli was a no go but the weather looked pretty good up at Coronet.  So, if we could get up Coronet soonish we had a good chance of getting some great weather and photos.

Josh and I headed up the mountain straight away.  That way, we would be ready to swoop into action as soon as Shae and Richie arrived.  Before long Richie gave me a bell.  He told me that they were waiting at the bottom of the Greengates chairlift and would meet us there.  At the time I have to admit, I was a little gutted at this point.  I had really hoped to get us all straight onto the main Coronet Express chairlift to the summit of the mountain.  There we would get 180 degree panoramic views from the top (with a 5 minute hike).

THE CALM BEFORE THE STORM

But looking back I’m so stoked that Shae & Richie asked us to meet them at Greengates.  When Josh and I skied down to the chair there were Shae & Richie, standing on a wooden pallet by the chairlift with a small fluffy dog sitting at their feet.  Shae & Richie both looked amazing.  Richie in particular surprised me because when we met up before the wedding he told me he would be wearing his “regular old snowboarding gear” on the day, but he turned up in a very stylish white suit jacket with black snowboarding pants.  Shae looked stunning in her simple but beautiful white wedding dress with snowboarding pants (and more than a few thermal layers underneath). 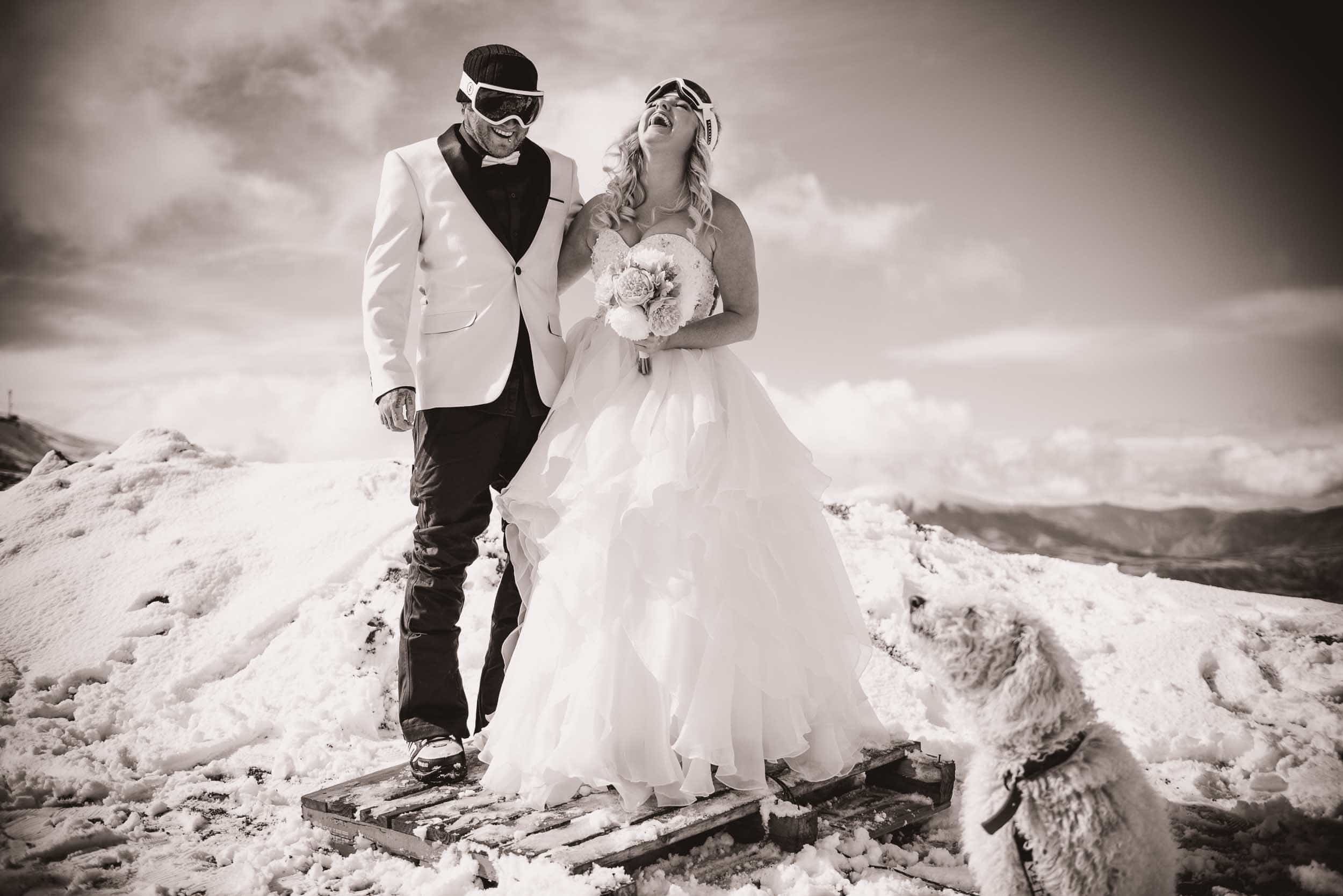 The photos of Shae & Richie with this cute little dog (who started howling like a wolf at one point) were awesome, hilarious, beautiful and totally them.  I couldn’t quite wrap my head around where this fluffy pooch had come from.  Shae & Richie told me his owner had tied him up and gone skiing.  It was so random but so awesome, and I’m stoked Shae & Richie loved the whole “random dog in the photo” thing as much as I did.   You just can’t fake this kind of stuff!  And this moment would never have happened if I had fixated on sticking to my original plan!  Yet another reminder that being flexible always yields more natural, beautiful (and sometimes surprising) results.  Not to mention a more relaxed, fun-filled wedding day.

Shae & Richie’s Queenstown Snowboard Wedding was pretty epic already at this point.  Little did I know things were soon going to get even more amazing!  (At this point the sun was out, the skies were blue and the light was beautiful.  Josh, Shae & Richie had no idea that this was the last time we would see the sun or the sky for the rest of the day and that things were about to get gnarly!!)

THE STORM AFTER THE CALM

After a few photos with the pooch we hopped on the chairlift ahead of Shae & Richie and their bridal party so we could get a few photos of them riding the chairlift in wedding dress and suit with the base of their snowboards visible (Shae’s said “Just” and Richie’s said “married”).  As soon as we got to the top of the mountain we were swallowed by cloud.  Then Shae & Richie, their bridal party, Josh and I skied down the mountain to the base building, shooting a little bit as we went. 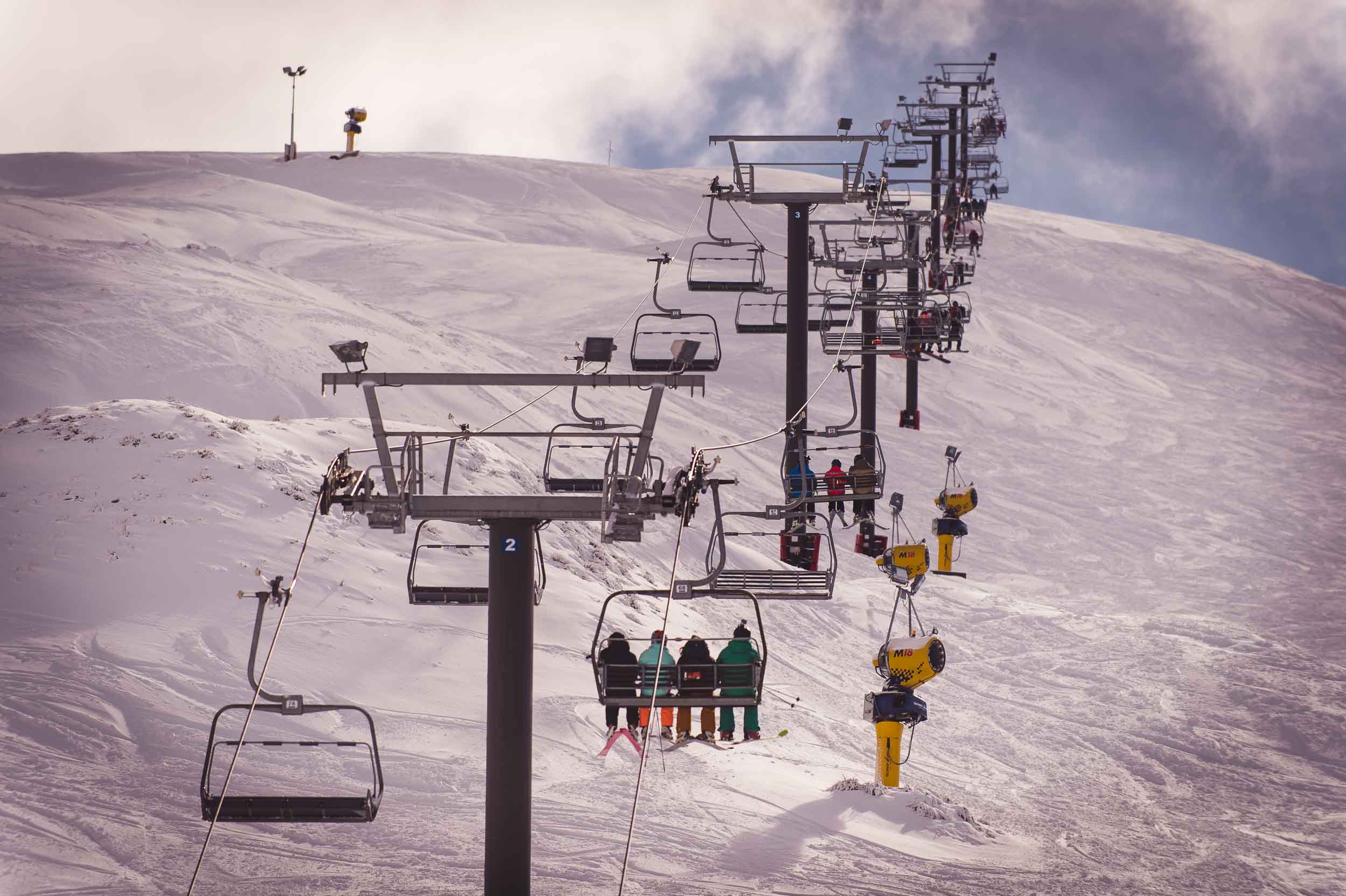 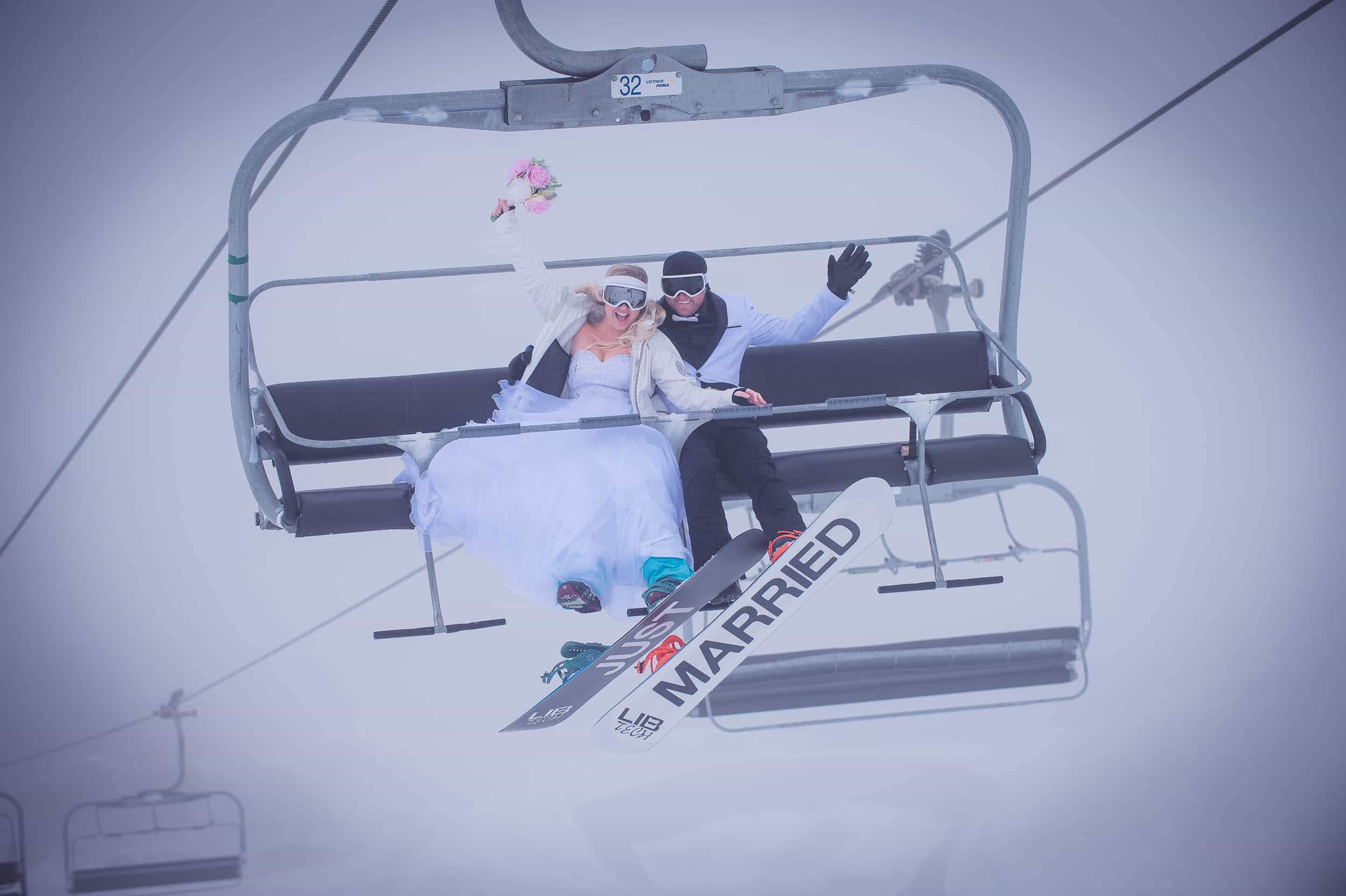 MARRIED IN A BLIZZARD.  ON TOP OF A MOUNTAIN.

Shae & Richie did a quick re-group at the base building and the rest of us headed back up the Greengates chair to the ceremony location for their Queenstown Snowboard Wedding.  When Josh and I got there it was snowing heavily, freezing cold and visibility was about 50 metres.  Luckily, the wedding party of 70 or so were all wearing good warm ski/snowboard gear with beanies, goggles and gloves.  They were happy as larry, drinking beer and chatting!  The bridal party walked in first, coupled up, then Shae & Richie snowboarded down to the ceremony spot.  They then unstrapped from their bindings and walked to the top of a small snow mound. They planted their “just” & “married” snowboards one on either side and the ceremony began. 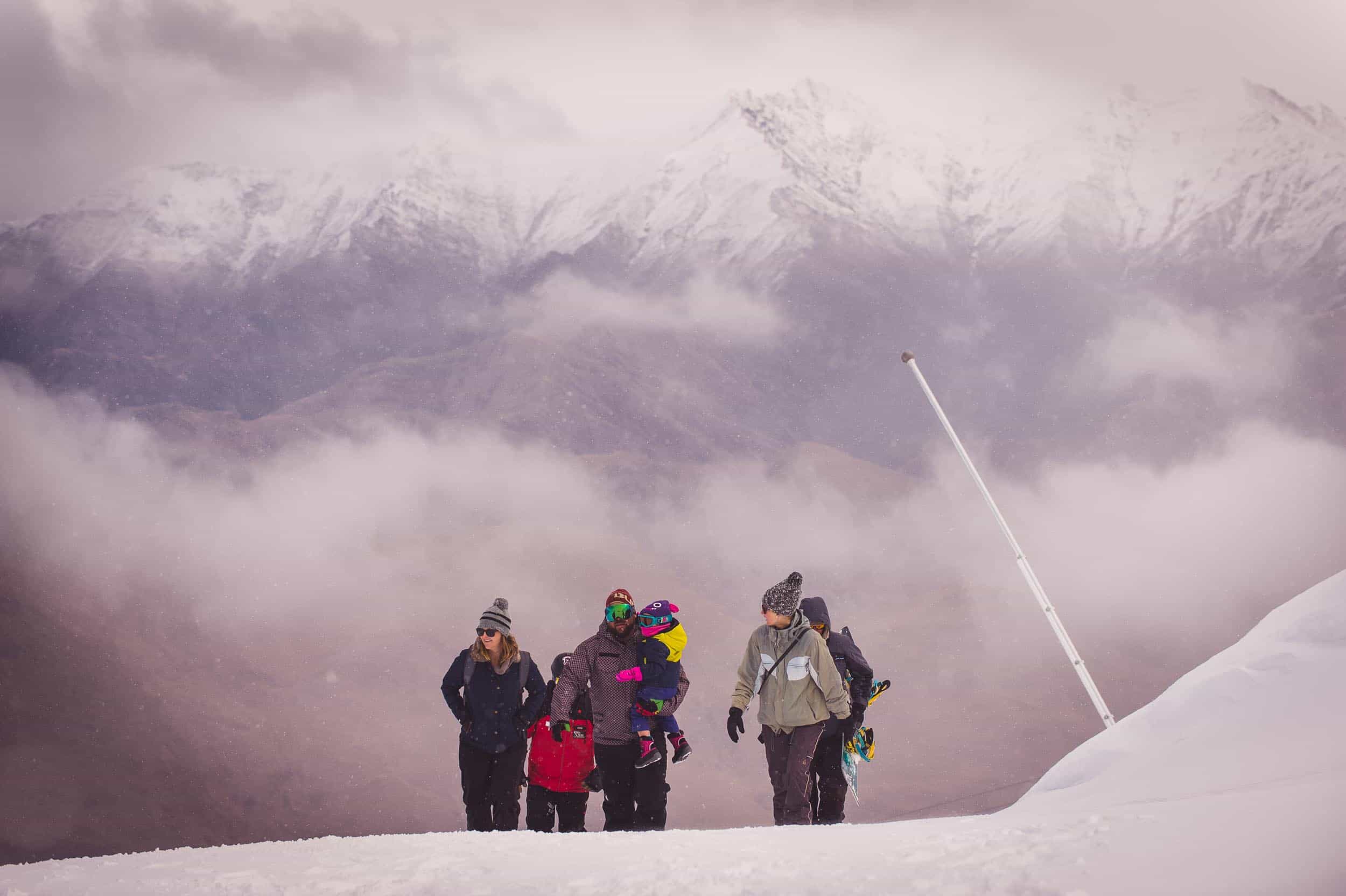 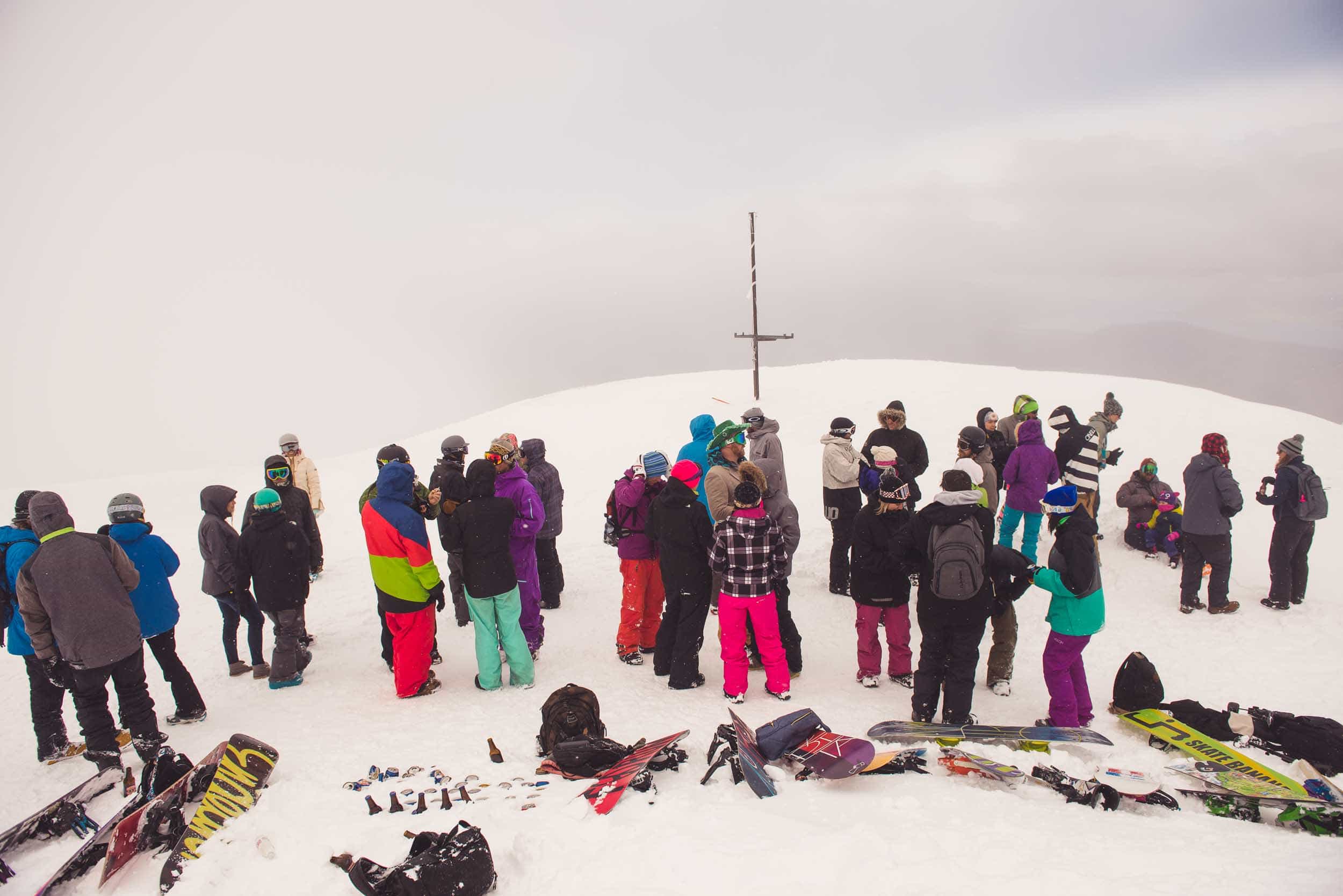 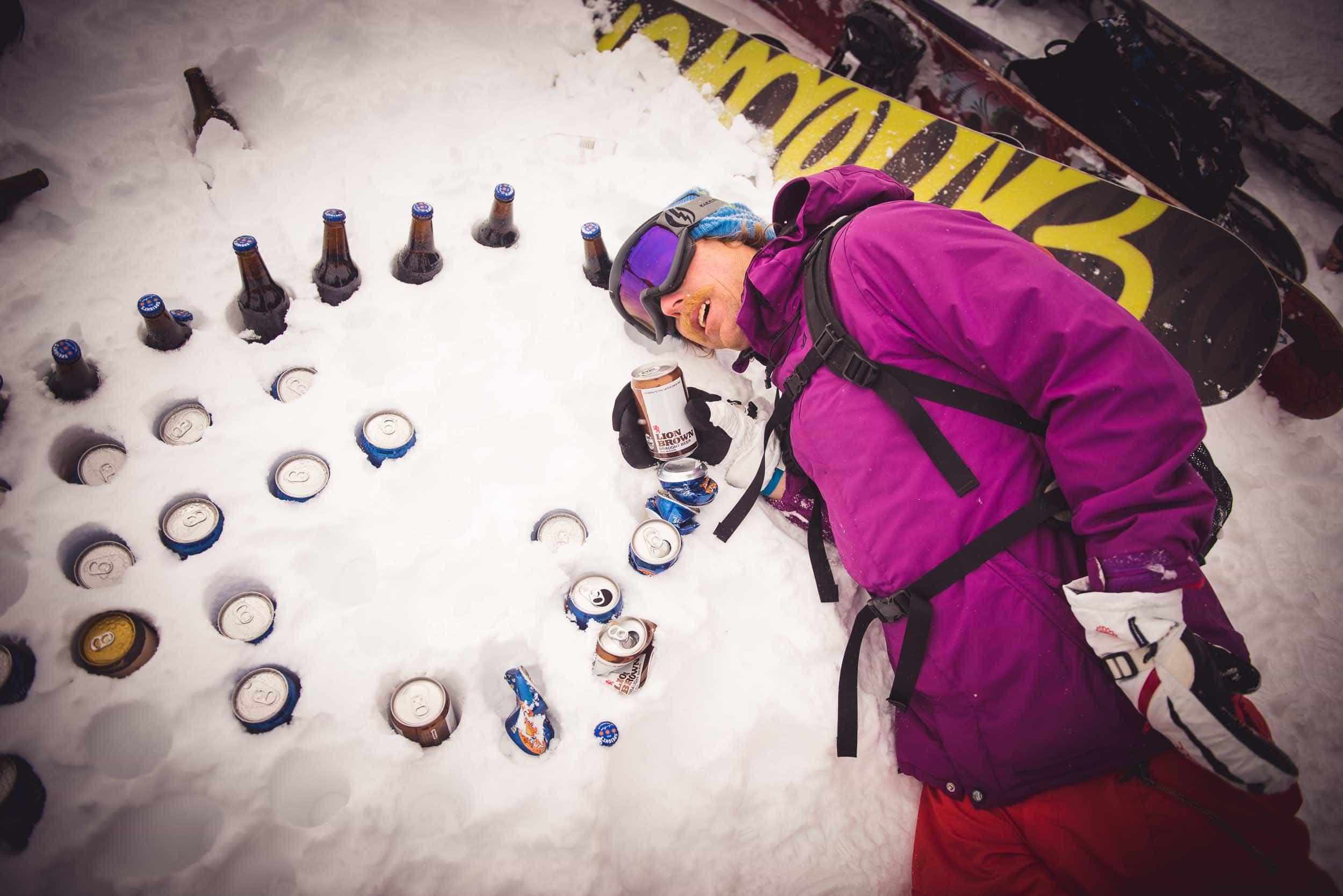 Kate, their celebrant, gathered all the guests into a tight close ceremony and then, in thick falling snow, Shae & Richie became man and wife.  There were so many awesome moments…like this one (below) when Richie pretended to drop the wedding rings in the snow! 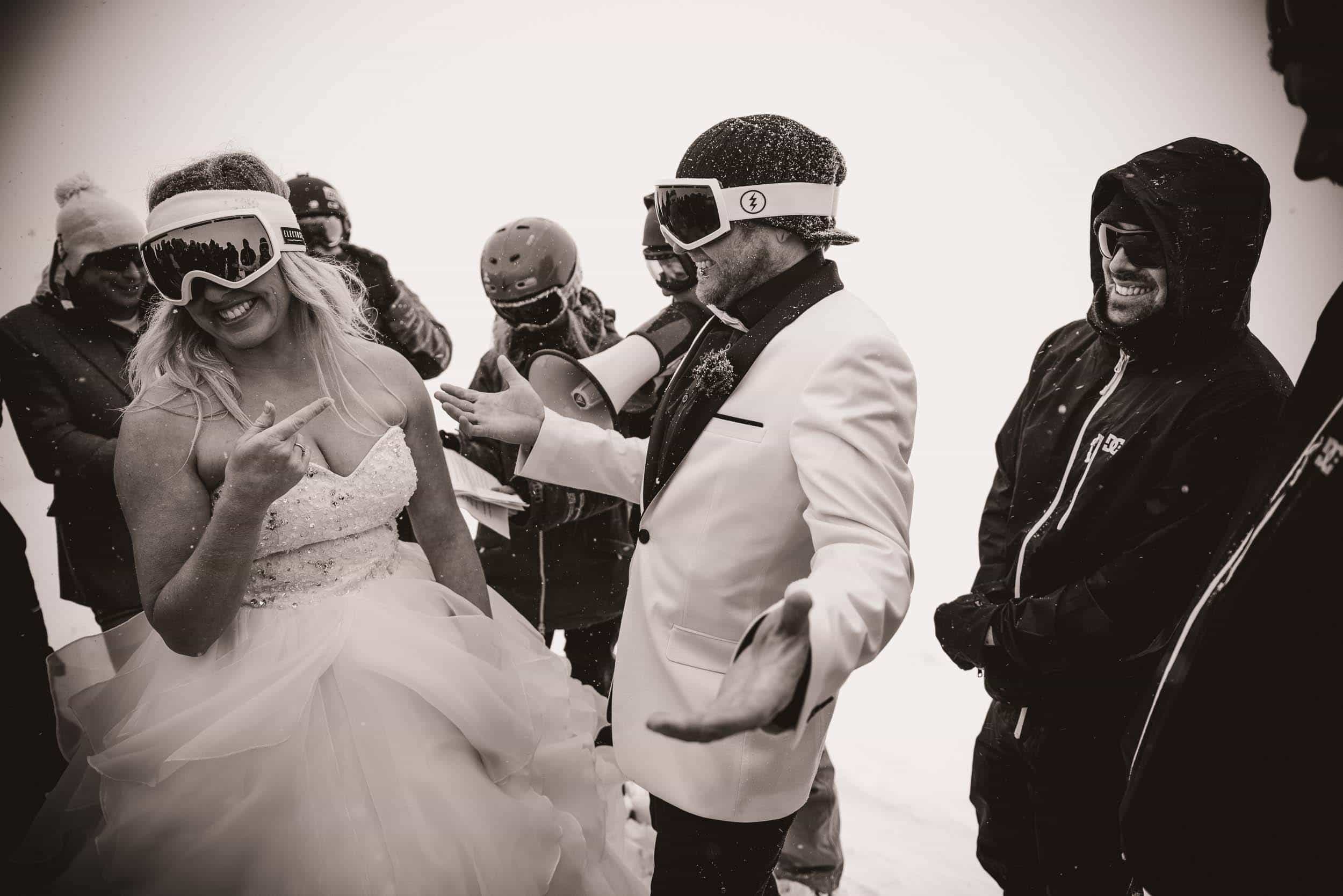 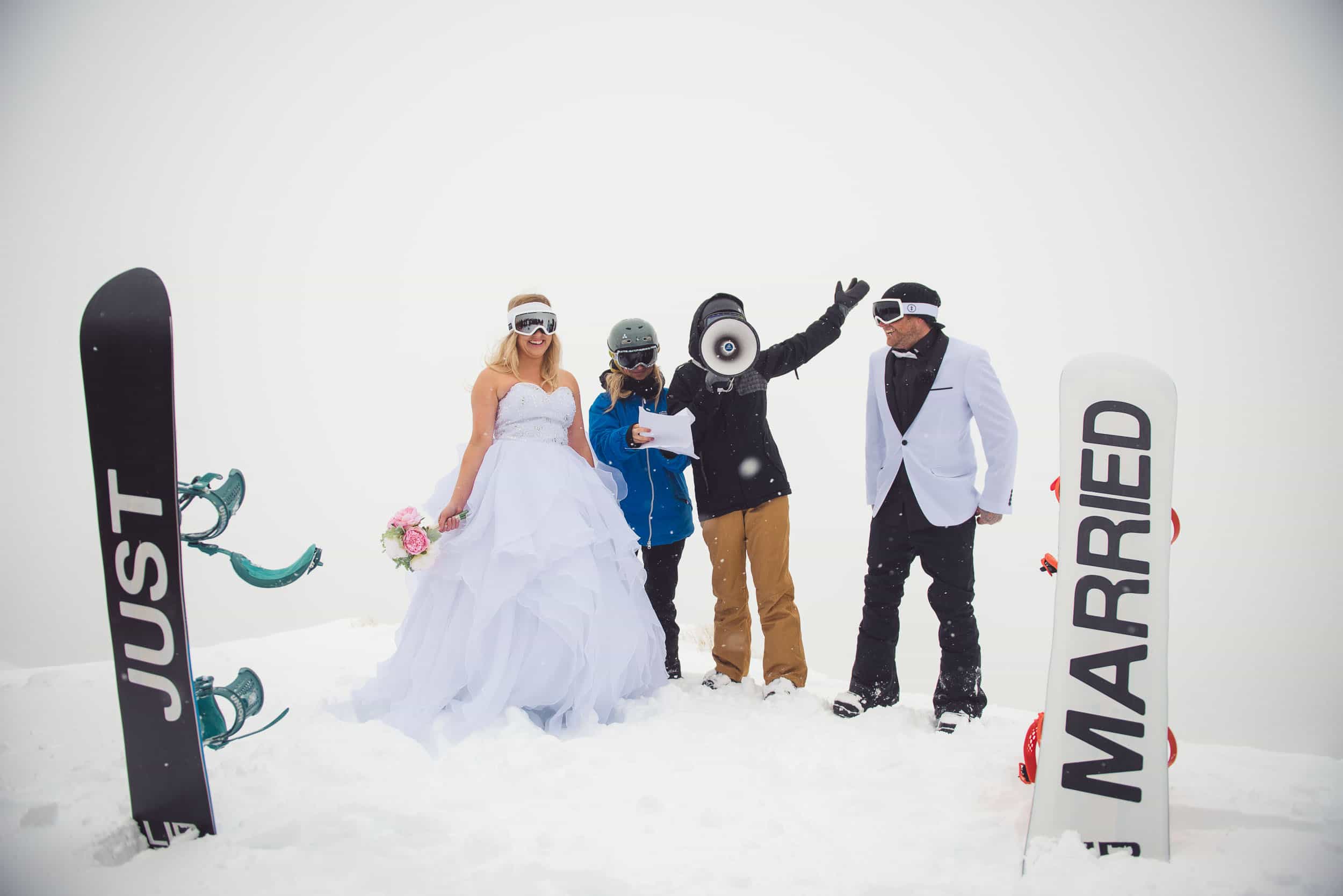 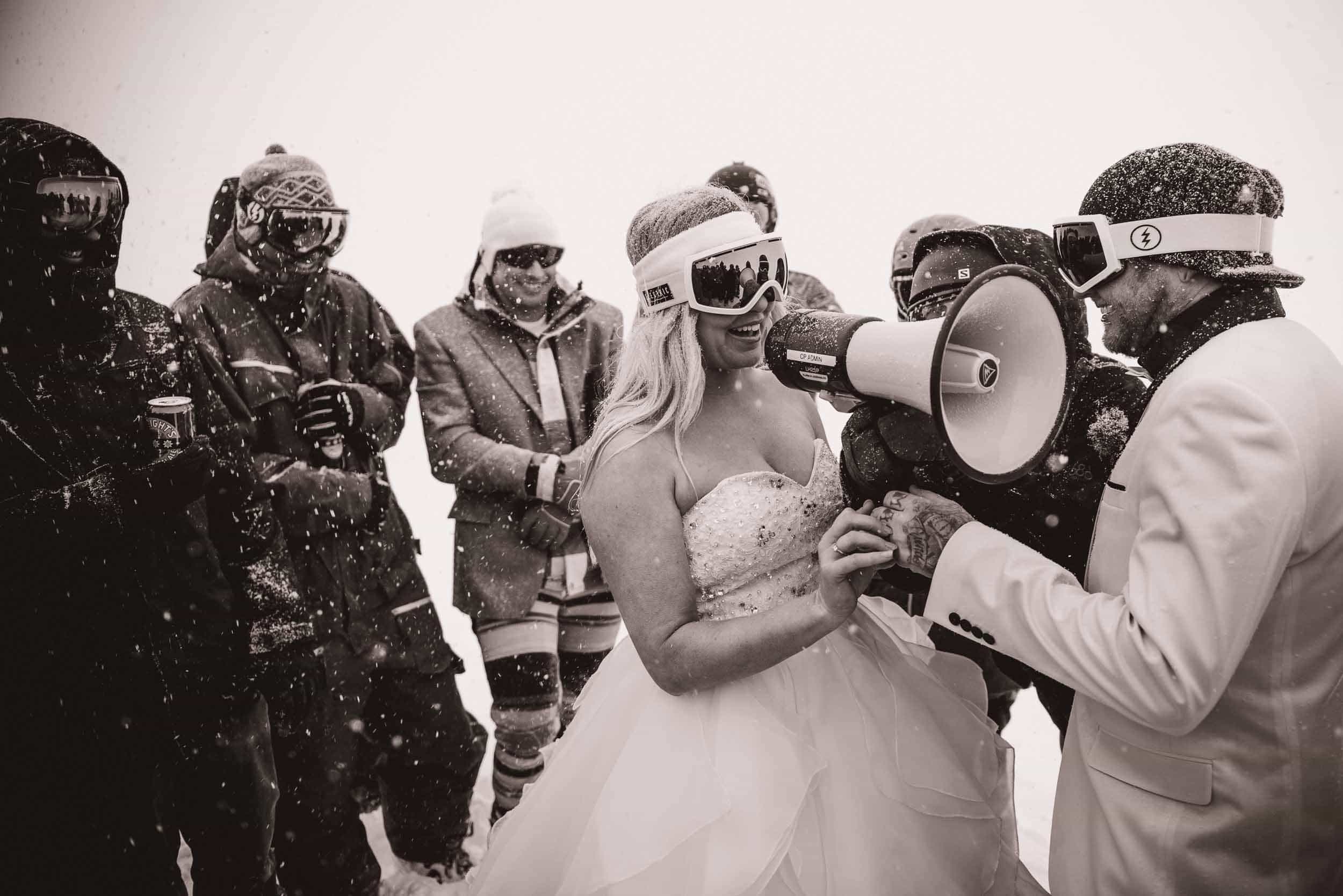 My shooting gloves had gotten wet earlier in the day when I was hiking to get the chairlift shot, so I was shooting in bare hands at this point, as was Josh.  We both had ski gloves but they were too thick and clumsy to wear while shooting.  I couldn’t feel my fingers hardly at all at this point.  Even during the ceremony I had to stuff them under my jacket every few minutes to defrost them.  Thick snow getting on our camera gear and lenses was also a concern.  So to sum up, shooting conditions weren’t easy…but man did it look freakin’ beautiful!!  I think though, I will buy better gloves for my next Queenstown Snowboard Wedding.

GETTING THE HELL OUT OF (A VERY COLD) DODGE

And with that the ceremony was done.  Before you knew it everybody was gone.  Most had strapped into their skis and snowboards, getting the hell out of dodge.  Those without skis hopped on the chairlift for a ride back down the mountain. 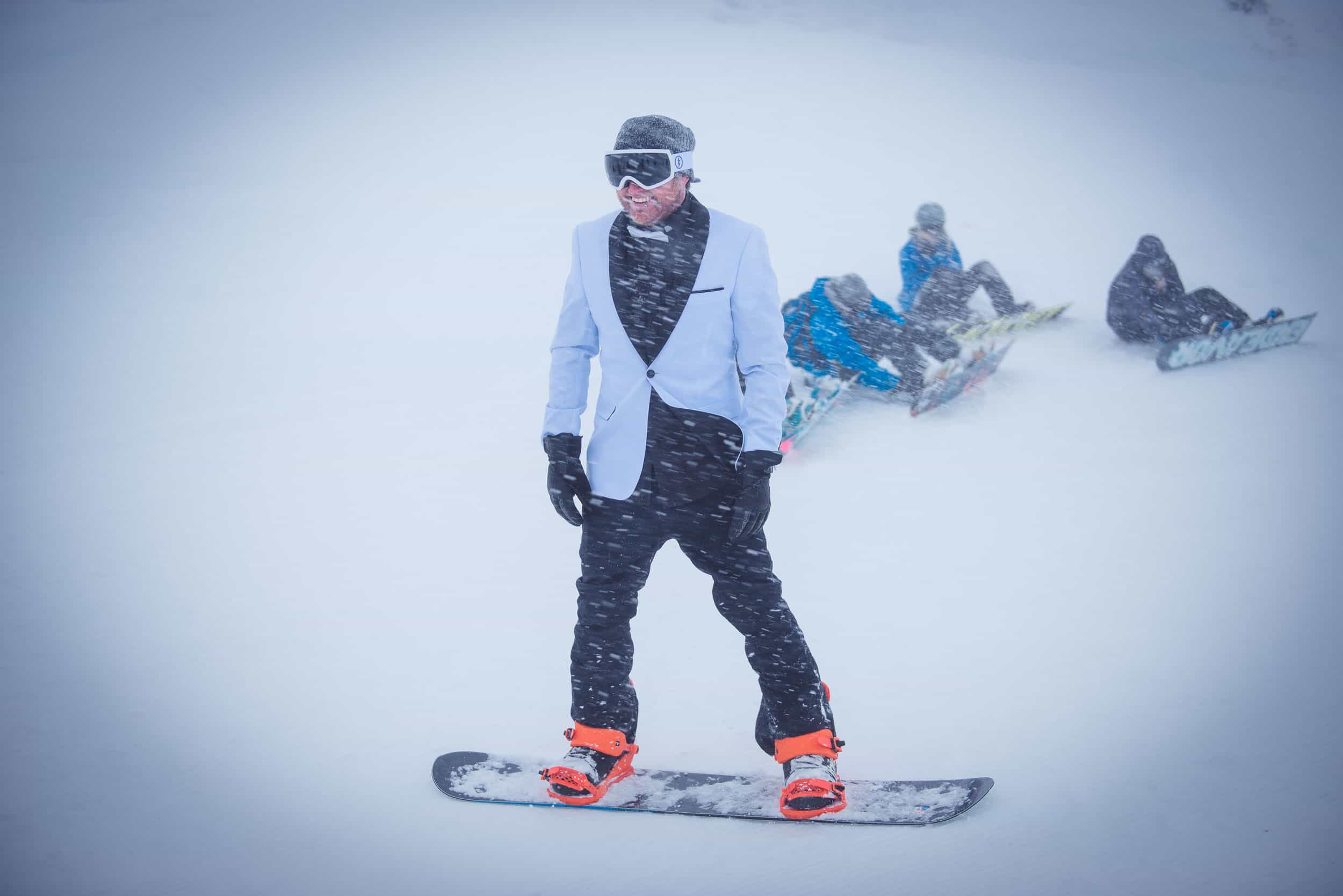 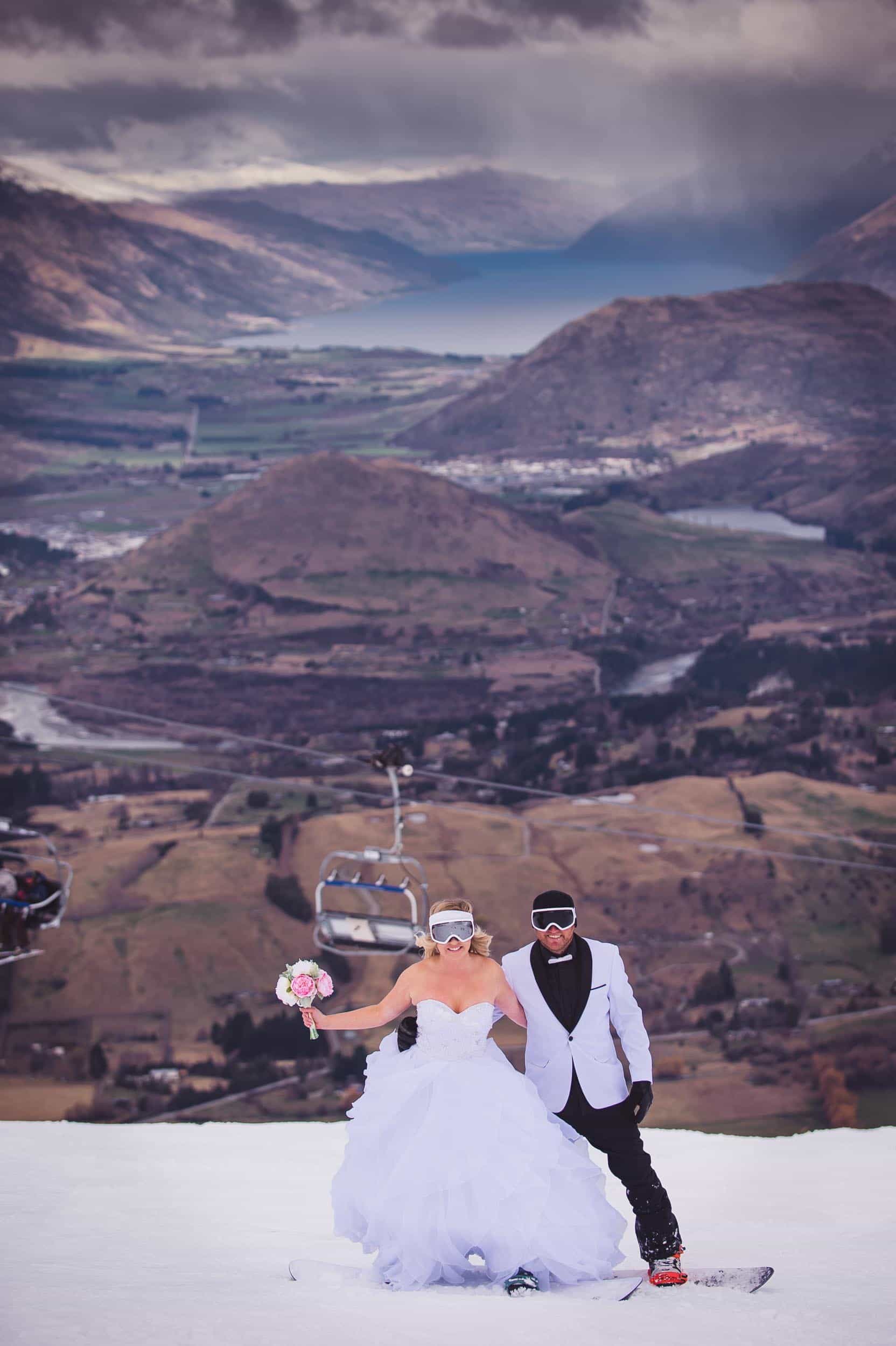 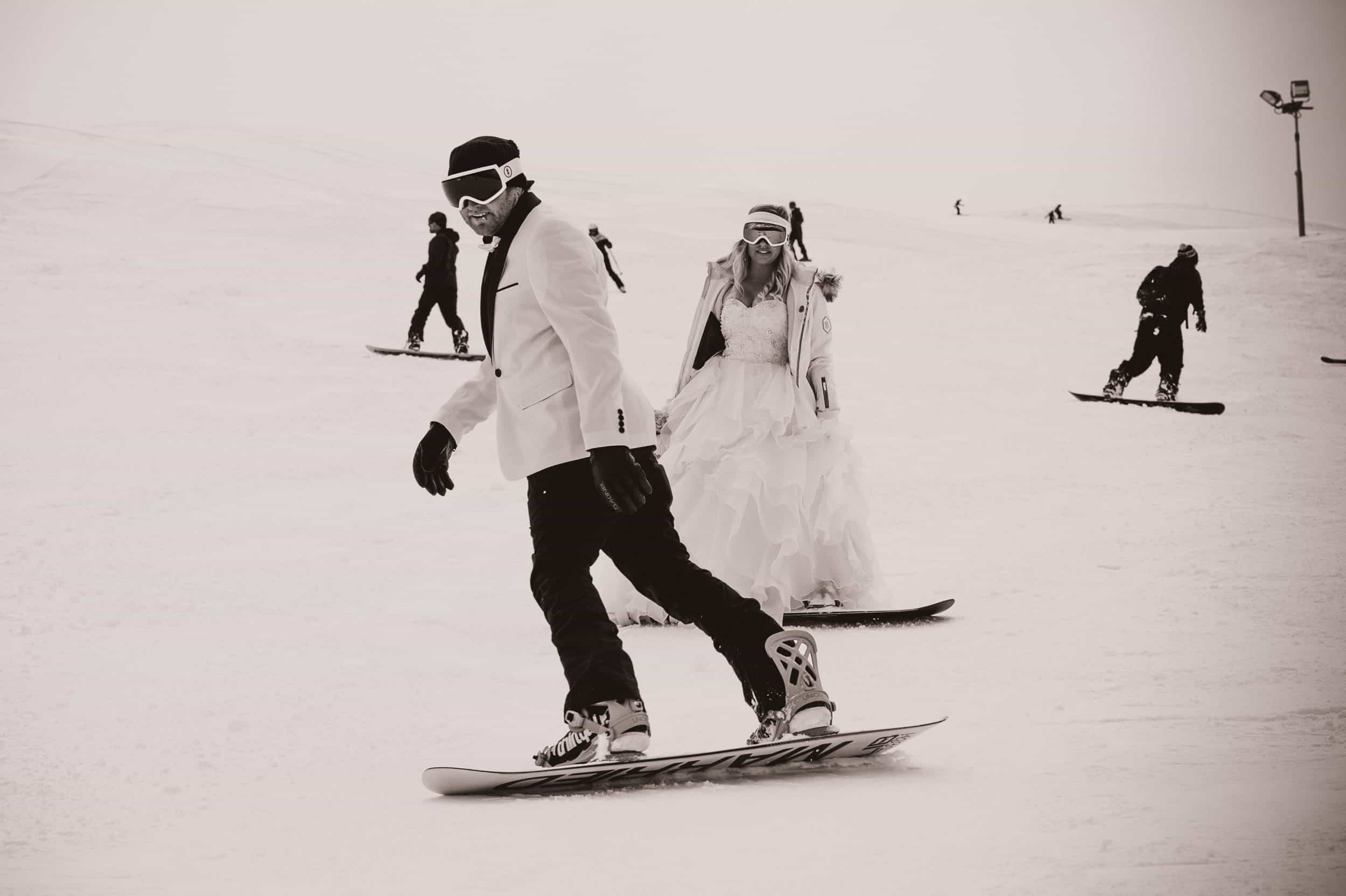 At this point it was a total whiteout and visibility was about 10 metres.  Josh and I skied down just the two of us (and our 25kg camera backpacks!).  I knew the mountain well, having worked on it for a few years.  But it was still hard work finding our way down.  We had to both stop about 10 times for a breather on the way down the hill legs burning.  We were definitely not ski fit!!

But we made it to the restaurant safe and sound.  After 15 minutes we managed to  defog our camera lenses and regain feeling in our hands.  We then shot the bridal party and group photos near the comfort and warmth of the base building.  Then everybody was off to the Pig & Whistle Pub Queenstown for Shae & Richie’s wedding reception.  It was at this point that I signed off for the evening and went home to defrost properly.  Josh stayed to shoot the speeches so I’m sure he will have some good footage of Shae & Richie’s crew celebrating an epic day…

Looking back on Shae & Richie’s Queenstown Snowboard Wedding now. I am so stoked it was snowing heavily during the ceremony.  I wouldn’t have wanted any other weather, any other location or any other couple!  Shae and Richie, all their wedding guests and Josh and I all fully committed.  With the results being something pretty special I reckon.  Epic even.

A huge shout out to The Flavour Queenstown (band), The Pig & Whistle Pub, Josh Hutchinson of Choice As Media, Colleen Rotto at Crew Stylists of Hair for doing an amazing job with the girls’ hair and makeup and Cup & Cake for the awesome cup-cake wedding cake.

If you are currently in the midst of planning your Queenstown Wedding, you might also enjoy the following Blog Posts and Real Weddings helpful and inspirational;

Megan & Simon’s Stunning & 110% fun Backyard Southland Wedding (Ok so this one isn’t in Queenstown but I love it!!).